Our Commitment Our Leadership Join Us Communities

While we don't expect to solve all of the problems in one of the poorest neighbourhoods in the country, we believe we can help bring the community together. 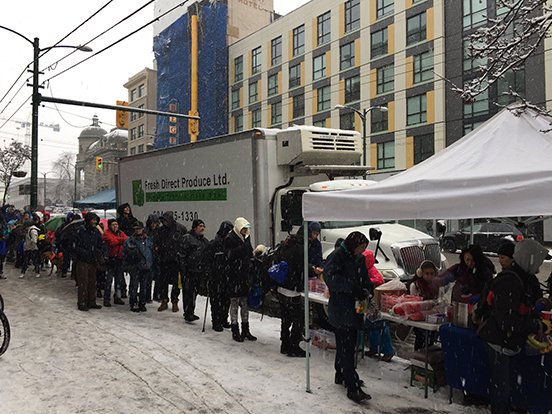 We've had an abundance of good fortune at Fresh Direct Produce and believe in sharing that success with the community that is the soil in which our business has flourished.

Sometimes giving back means sharing the fruits of our labour—literally. Each week, we fill a truck from Vancouver's Quest Food Exchange with pallets of produce that we donate. Fresh Direct also donates produce to the Strathcona Community Centre's breakfast, lunch, and backpack program. We hold annual drives to provide hot soup, fruit and snacks to people living in the Downtown Eastside of Vancouver.

Since our inception, we've been proud supporters of the BC Children's Hospital Foundation. Every year, a corporate team composed of members of our staff, their families, and friends participates in the Foundation's annual Race for the Kids. We also give some of the proceeds of our annual mandarin orange sales to the Foundation. Over the years, we've raised $300,000.

Some of the other benevolent organizations to which we contribute include the Vancouver Food Bank Society, Truck Stop Dining, Critter Care Wildlife Society, and the United Way. Local churches and school fundraisers also benefit from our donations.

It is our privilege to be involved with the many non-profit organizations and volunteers who donate their time and efforts to helping each other and our community at large.

"We are so grateful for the ongoing support we receive from Fresh Direct Produce. Your commitment to healthy communities and your passion for pediatric health care has a positive impact on the 1 million children we serve in BC and the Yukon. It is thanks to donors like Fresh Direct Produce that we are able to aim higher for our kids."

Since I have started working for Fresh Direct there have been multiple opportunities for my colleagues and I to improve our skill sets. Fresh Direct truly believes in providing training(internally as well as externally) for its employees to better not only themselves professionally but personally as well. This open-mindedness provides a wonderful environment allowing us to not be afraid to ask questions and seek the answers no matter where that takes us. It has been a great pleasure of mine to work for Fresh Direct and I look forward to the future.

"The customer service at Fresh Direct is one aspect that stands out for our operation. They are responsive and always willing to work within our needs. Having a location in our city of operation has been a another big plus! Our business together has grown more than anticipated and this is a sure sign they are doing good work."